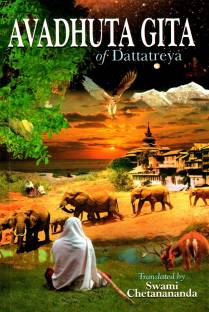 The Avadhoota Gita is writen by Sage Dattatreya.

Dattatreya is regarded by many as the foremost incarnation.

He was the combined incarnation of Brahma, Vishnu and Shiva. His narration was recorded by his two deciples Swami and Kartika. It is undoubtedly one of the ancient most Hinhu Scriptures. Dattatreya belonged to the ancient Vedic period as there is a Dattatreya Upanishad in the Atharvaveda. He is definitely before the Ramayana period as it is mentioned that Dattatreya taught the Shoda- nyasa of Srividya to Lord Parashurama, who was before Lord Rama. He also taught the Asthanga Yoga to Patanjali, who then wrote the famous Patanjali Yoga Sutras. The Avadhoota Gita is regarded by almost all sages as the greatest treatise on Advaita Vedanta. Some are of the openion that Dattatreya was the originator of Tantra.

Legends about his birth are many and varied, and the place he died is unknown. It is stated that he was born on Wednesday, the 14th day of the Full Moon in the month of Margashirsha, but of year and place there is no reliable information. Scholars speculate it must have been not less than 5000 B.C, or even earlier.
Swami Vivekananda once said of the Avadhoota Gita, ‘Men like the one who wrote this song keep religion alive. They have actually self-realized; they care for nothing, feel nothing done to the body, care not for heat, cold, danger, or anything. They sit still enjoying the bliss of Brahman.’

The story of Dattatreya is told in many Puranas. The story from Markandeya purana, chapter 15, is as follows:
A brahmin named Kaushika was enchanted by a courtesan and lost his wealth, health etc. However, his wife, Shandili was faithful to him. She even carried him on her shoulders to the courtesan’s place. Once, by mistake, she stepped on Sage Mandavya and the sage cursed both of them to die by sunrise. Shandili prayed and appealed that the sun may never rise so that her husband would live. Her prayer was answered and the devas were in an uproar seeing the world order of time destroyed. They asked for the help of Anusuya, the wife of sage Atri, to convince Shandili. Anusuya was able to convince Shandili on the condition that Kaushika would live on sunrise. In appreciation of Anusuya’s intervention, the gods granted her three boons. She asked for her liberation, her husband’s liberation and that the three gods Brahma, Vishnu and Shiva be born as sons to her. The wishes being granted, from Sage Atri’s eyes issued a light and served as the seed for the divine sons – Soma, Durvasa, and Datta – partial incarnations of Brahma, Shiva and Vishnu, respectively.

Other puranas give different narratives but all involve the attribution of the name Dattatreya to mean ‘Son of sage Atri.’ For example, there is a story is that the gods decided to test the chastity of Anasuya, the wife of the rishi Atri. So, brahma, Vishnu and Siva went to her posing as handsome men. However, Atri was not fooled and transformed all three of them into a single child with three heads. This child is known as Dattatreya and is considered to be an incarnation of all the three gods: Brahma, Vishnu and Mahesha.

At birth, Dattatreya looked like a well-developed child of three or four years. Right after his birth, he told his mother, ‘I am leaving home.’ She told him to at least wear a langoti, a loincloth. He said that he did not need one: ‘I will live just as I have come.’ And he spent his whole life as an avadhoota. He initiated thousands of people. Even while on the move, he would make disciples, give mantra diksha, work for their deliverance, without any discrimination according to religion, caste, sex or conduct. He spent most of his life wandering in the area between and including North Mysore, through Maharashtra, and into Gujarat as far as the Narmada River. One scripture refers to a disciple finding Datta meditating on Gandhmadana Mountain. He attained realisation at a place not far from the town now known as Gangapur.

He is said to have lived a rather unconventional life, first being a warrior, then renouncing the world and practicising yoga and then drinking wine and living with a maiden etc to show his disciples that he could be unattached to such mundane pleasures even if he indulges in them. Dattatreya is said to have met Shankara near Kedarnath before Shankara’s mahasamadhi. There is a still a cave in Kedarnath signifying this event.

Apart from Avadhuta Gita, he also composed the Jivanmukta -gita which is a short compendium of 23 verses which talks about the jnani (jivan mukta), a tantrik text known as Haritayana Samhita and Dattatreya Tantra.
Dattatreya is also mentioned in the Mahabharata, in the Yagyavakya Upanishad, Jabala Upanishad, Narada-Parivraja Upanishad, Bhikshu Upanishad ans Shandilya Upanishad. The Vaishnavites hold him in high esteem since he is mentioned as a incarnation of vishnu. Dattatreya is the narrator of the Jnana Kanda of tripura rahasya to Parasurama to dispel the latter’s doubts on liberation. This contains the famous Shodanyasa of Devi. (The story of Samvrata found in tripura rahasya has been cited by shankara in his brahma suutra bhashya).
Dattatreya is usually depicted with four dogs by his side, representing the four vedas, a cow behind him representing Lord Vishnu, a trident in his hand representing Lord Shiva and three heads representing Lord Brahma.