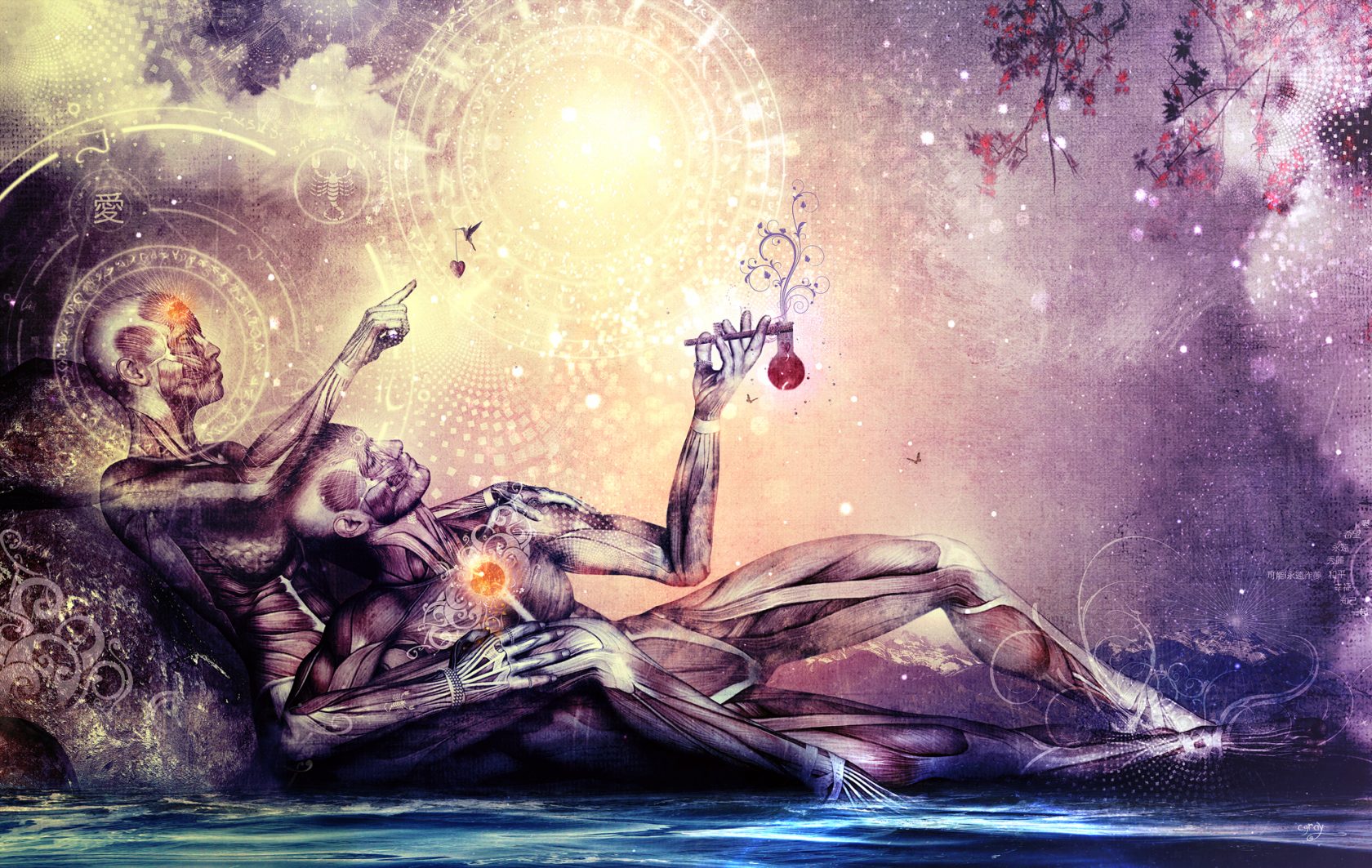 In the Nature of Light -1, it is suggested that light, as it arises from an intentional thought, operates in the etheric medium of Space as an impulse of pressure and that it only “appears” when subjected to or defracted by an atmosphere to then become a travelling wave phenomenon.”

Let us envision the trajectory of an impulse of thought as it becomes a wave of light.

From our human perspective, the Soul or higher Self is often imagined as being “above”, whereas our human experience is perceived as being all around us. Above us, the Sun and below, the Earth upon the periphery of which we play out our drama, being upon the surface of the Sphere.

When you create a thought with intention, it is as if impulsed from above, vertically speaking, upon the surface that separates mind from the matter. This surface is the etheric sea. Thought moves upon the surface of the waters, that is from the emanating centre that is everywhere present. The surface of the etheric membrane is impressed as if by the pressure of thought. It then takes on a geometric pattern of energy that moves ever outward, as if horizontally upon the surface. These wave like patterns form vibratory worlds in which we live and move and experience our dramas.

These incredibly beautiful images demonstrate the effect of coherent sound creating standing / longitudinalwave patterns through the medium of water. A way to levitate more than the mind?

Do you notice how the standing wave patterns fits with the Flower of Life?

On a cosmic scale the projected intentional thought, imparted through sound, takes on trajectory, like the Sun moving through Space, around which the planets orbit and rotate. Thus, the trajectory of thought imparts orbital relationship with other beings and lives that have similar thought forms, and spin or rotation signifying the autonomy of a self-created span of life.

Helical Model of Our solar System by DjSadhu

Helical Model of Our solar System by DjSadhu

And see also: The Helical Model part 2 – Our Galaxy is a Vortex

Each sphere of life has its centre and axis of rotation, relative stillness within contrasting with the peripheral surface upon which the drama is played out upon a seeming endlessly turning wheel!

The mind can be experienced as such a sphere of “Space”, empty and void like a pool of water without a ripple, without reflection.

On Rings of Light – “They are the basis, and the substance of all form. Whey they appear, matter appears. When they disappear, matter disappears, and all effects of matter with them, such as sound, color, heat, form, density and dimension.” – Walter Russel, Scientist and Philospher

Imagine a Star appearing in the centre … then become the Star. Is one aware of a radiant “light”, or rather the space of emptiness, of beingness where all Stars are one? Yet, we “see” the reflected lights.

Until it is seen the Star does not “exist” in the finite sense of that word. Only imaged and seen does it have an appearance and a fixed reality. Quantum Physics is really telling us that an observer must be present, who sees through an atmosphere, that is of the lower concrete mind. The Stars do not appear in open Space apparently, to the observer, because they are in “super position”, that is not fixed by the eye of the mind. Indeed we can be like that, one might imagine choosing any point of origin in time and space to appear. Just imagine! To be clear where there is no physical observation – Space is a pure field of being, of consciousness free of form and void.

The pathway from Source into the light of form is a descent into lower octaves of vibration. This is “Ariadne´s Thread” assisting Theseus, a solar god, to descend into the labyrinth of Taurus, symbolising both the lower mind of Earth and the desire nature of the Astral realm, whilst not loosing his way (continuity of consciousness). Ariadne´s Thread is both the Antahkarana, the pathway of the Soul we call the “rainbow bridge” and the pattern that gives rise to form in the three worlds.

The geometry of which can be described numerically and musically. The solar pathway through the divine feminine creation is symbolised by the number “13”, this being the one tone common to all octaves and planes of vibration. Doubled or halved it is simply the tone that is in resonance with all other octaves, from atom to star, around which are gathered twelve semi-tones of light. In the harmonic progression and development from “1” to “3”, “7” and “5”, forming “12” there is then a “13”th point at the centre, geometrically forming a stable pattern – a “Vector Equilibrium”, as discovered by Buckminster Fuller.

Vector Equilibrium – a stable structure of Light in Space

Vector Equilibrium – a stable structure of Light in Space

The Soul is an impulsing and emanating centre, like the Sun in our Solar System. The Soul proceeds in the creative work with unconditional love and sets up a vertical impression, an impulsing or breathing rhythm. This rhythm corresponds and gives rise to the origin of numbers of “3” and “6” and “9”, where “9” is Spirit, unchanging by multiplication or division numerologically, and “3” and “6” represent the primal oscillation of Yin and Yang, or the right and left hemispheres of the lower Earth mind – the trajectory from higher to lower mind.

In contrast, the appearance of light is symbolised by repeating wave patterns emanating from the impulsing centre giving rise to the lower mind world of appearances. The numerical pattern of infinite replication and reproduction in time and space is given by:

Compare with above image, here shown is the combined movement of these two patterns of energy, in fact forming a swirling vortex of mind interacting with matter – an infinite dance reproducing the cosmic Pattern.

These swirling energy patterns form themselves into the DNA spiral as a toroidal vortex of life, originally depicted by Edwin Babbit as the etheric anu or atom.

Thought has electrical potentials both as mind interacts with ether and in the world of appearances. In the etheric realm of “inner space” the electrical science speaks of counterspace (Eric Dollard, Steinmetz) in which longitudinal pressures between any two or more emanating sources and resonant receivers, enable synchronous and instantaneous communication. In this domain time does not exist.
This type of impulsed electricity is “dielectricity”, that is having a +ve electrical component without a –ve magnetic complement. Dielectricity or impulse electricity gives rise to electro-magnetism, being both visibleelectricity with a corresponding complementary emanating magnetic field. The one exists in counterspace the other pair in magnetic / space and electrical /time. Electricity and magnetism are similarly related but at 90° to each other, the one forming an axis, the other a rotating field.

A photon of light can be made to move out from “super position” into visible form having both a positive and negative electron charge. In performing work, the electron pair seek to cancel out their combined charge to refold themselves back into the etheric void.

For a fascinating explanation of the unified wave theory of the nature of the universe, see “Dirac’s Equation and the Sea of Negative Energy” by DL Hotson a theory that would, at the time, have maintained continuity of the etheric sciences in contrast to the notions of Einstein.

The landscape of two worlds begins to open up before us, the Sphere of Mind where thought impulses the etheric membrane that separates the worlds and the phenomenal world of perception, sensation and action where vibration gives rise to an illusion of apparent solidity, fixed and permanent, yet transitory light.

The Soul is an unbounded, unmoving centre of consciousness everywhere present. The impulsed word or thought is taken up by the Devic form builders and clothed in lighted substance. In our human form we create an atmosphere around us. We build it with words and language. Through it we see the illusory play upon the waves all around us, yet, by returning to the still inner centre everywhere present, upon the axis of our turning Sphere, Ariadne´s Thread links through all planes and emanating Spheres, we are One.

Every Star we see is a manifestation or expression of a much greater Mind relative to ours; not just that but each one of those ‘LIGHTS’ was once a human being just like us. Infinite is the journey of the soul.

As the mystery of electricity and the Deva evolution unfolds to us through an approach of unconditional love, we humanity can begin to participate in learning how to work consciously in the process of cocreation within a community of Light, seeing and being as an Observer, the consciousness that permeates all things, allowing through a cosmic unfoldment of beauty that is the sign and design of One Life.

Let us enter joyfully into the dance of Light!